The War to End All Wars (album)

The War to End All Wars

Chris: "So we got into lockdown for two weeks in the warehouse and there was some heavy drinking involved, hahaha, and having played PlayStation and just having a good time with each other. And then Joakim and me started talking: "Maybe we should sit down a few days and just see what comes up". And then we started writing a little bit and The Royal Guard came up. And then we started writing a few other songs and then it got to a few more songs... And then we sat down again after one year I think, when it was quite okay to go out with people. (...) So Joakim came to Falun, we sat down again and everything just came out of us, it just felt natural. And it was so much fun to sit down again and write songs. So everything just came naturally. Usually we write songs and then just go "Oh, that's a cool one!" And the we'd take all of those songs and see whether they fit together and all that."[22]

Why half of the music was written by Joakim and Chris:

Joakim: "(...) The rest of the songs are from me. It's a geographical thing. He (Chris - ed.note) lives near Falun and sometimes I go to Falun to write songs and then we meet there. During this period, it hasn't been as easy as it usually is. I live in Norway and the border between Sweden and Norway has not been as wide open as before. When I crossed, I had to be quarantined, tested and all. That's also the reason that there is no song, for example from guitarist Tommy Johansson on the album. When it has suited me to go to the studio, it has not suited him and vice versa. I had a song that we've been working on for several years that I was going to finish with the drummer Hannes Van Dahl. It didn't get finished that day. This time either, haha! (...) March 1, 2020 we were on a Russian tour when the world was about to close down. When we went home, we decided, Chris and our drum technician "Kebbe" to isolate ourselves in our warehouse in Falun. We stockpiled food and booze for two weeks, then we locked the door. At that time we didn't know very much about the virus. Its contagiousness, vaccination and all that sort of thing was still unknown and our thoughts were that we absolutely can't bring any shit home to our families. We ourselves were already infected, so we reasoned that we might as well ride it out together. If someone got worse, we could take care of each other. (...) Then it goes as it goes and lots of songs get written. What else was there to do after breakfast and a shower? We had two weeks together and when we had it the last time, I don't know. If we even had them before. That's a lot of hours to pass so it was just a matter of getting down to business and just going for it. The single "Livgardet" which was released in the spring was written in that vein. I think I want to say the cliché that it was "the best time in my life", almost. If I have to be in lockdown, I'll be sitting with Chris and Kebbe, haha!"[23]

Joakim about his songwriting:

Joakim: "(...) something I've noticed about my songwriting: whenever I'm writing with someone, the bridge is a break. You take the guitars out to make room and create a dynamic and then go back in. It calms down, there are only the keyboards, the drums are more relaxed, there is some bass and I sing a little, then it starts again. Falling into the trap of using these building blocks in the same way is very easy. So in several places - I think it's three songs or something - we let the guitar melody or an instrumental part play the role of the bridge. There's like a melody that you can almost sing along to, and then the guitar solo comes in. So, from that point of view, absolutely. "Dreadnought" definitely has a longer solo than we usually do. We actually doubled it, because we thought Tommy played it so well! [laughs] So yeah, that song has a longer solo, and there are more instrumental bridges. But I would say the average guitar solo hasn't changed much. But it does build up, obviously, so there's actually more guitar."[24]

How it was to record the album during the COVID-19 pandemic:

Joakim: "(...) on a personal level, I missed the fact that Chris and Tommy were not there while Hannes was recording the drums, because it's nice to be together. But the album didn't suffer from that. It was the same, except that Hannes wasn't there while recording the guitars, or while Pär was playing, or while I was singing. It's weird to say, but actually, as much as the pandemic affected us personally, it hardly affected the production of the album."[25]

What the band thought about the sound when the album was finished:

Joakim: "I think it's pathetic when an artist goes, 'It's the best album we've ever made,' and they keep promoting the same tired line. I say it's up to the listener to decide that, but I know for a fact that everybody in the band, without even sitting in the same room together, because I sort of shipped out the pre-mixes to everyone, and everybody — this is the only time in our history this has happened — everybody came back with, 'Fuck. That sounds great.' Everybody is super happy with the production. We were always happy before, but it was, like, 'Maybe this, maybe that.' Now it was more like, 'Okay, yeah, I have some suggestions and ideas, but wow.' We're really happy with the sound."[26]

Why the album is about World War I again:

Joakim: "(...) We didn't have the songs for all the stories, and we felt like we gave up so many. Like the Harlem Hellfighters, for example. I thought that was an obvious subject for the previous album, but we didn't have a song that did that story justice. Emotionally, it has to fit. And then we got so many ideas from the fans... When we announced the album (The Great War) and people heard it, they said: "Why didn't you talk about this? Why didn't you talk about this? You should talk about this." And we were like, "How the fuck did we miss this?!" Sometimes out of sheer ignorance - we didn't know anything about it. Sometimes because we didn't have the right song. And sometimes, simply because we didn't have the time or the opportunity. We knew the story, we tried to put it in, but it wasn't good enough! [laughs] We could probably tell enough stories about the Great War to make five albums. I'm not sure if that's what we want, or what the fans want, but the stories are there."[27]

Joakim: "There are interviews from the last album promotion round where I talk about things that we left out, like Harlem Hellfighters. They're on the record now in the form of Hellfighers. We had done such an incredible amount of research for "The Great War" and felt that there was so much more that we wanted to write about but couldn't, as we didn't have the right songs for it. Somewhere you also have to sift through the creative process and that's why "The Great War" was the way it was. When the album was released, we received thousands of emails, and that's not even a exaggeration, from our fans with suggestions for things that we had no idea about. It felt like we hadn't even scratched the surface with "The Great War". Then when the tour became interrupted when we had a lot more left than we had time for... I don't know, I guess we didn't feel like we were finished with World War I at all."[28]

Pär: "As always, after we released a record we received many suggestions from fans about the stories we had forgotten - Christmas Truce was on our list anyway, but we didn't know when it would fit. After the pandemic threw all our plans out the window, we decided to give this section of the story not just a song or an EP, but to dedicate another whole album."

Tommy Johansson: "We always feel inspired by what we've done before. The lyrics of both albums intertwine, and so does the music - although we've changed something about the sound and brought in a lot of things we didn't have before."[29]

Joakim: "(...) we felt like we had missed so much and we found a lot of other stories to tell. But more importantly, we couldn't finish The Great Tour. It was interrupted and we ended up abandoning it. There are a lot of people who didn't get to see these songs live. Maybe they would have really wanted to see this song or that song, and instead we would have gone on a whole new cycle, with a whole new subject. Let's say we went to the Napoleonic Wars. Visually, the stage set would be very much focused on that, which means that we would have to abandon a lot of things from the previous album. Now we can play both albums at the same time, in a kind of brotherly relationship. I don't know [laughs]. For us, it made more sense."[30]

Why the album doesn't follow the events of World War I chronologically:

"Like the album itself, The War To End All Wars' cover is a kind of continuation of the concept from the previous release. It's a reflection and addition to the cover art of The Great War. Its colors are purple-bluish, which is the opposite of the previous cover art that had a yellowish color scheme. On the cover of The Great War, struggle and suffering appear in the earthly, physical world, while death, passing, and the end are reflected in the sky. The struggle on earth is finite, but death is eternal. On the cover of the new album, death, the end, destruction appear in the physical world, while in the sky, in the spiritual world, fighting is eternal — it goes on indefinitely, lost in the distance of time and space. In fact, wars never end, because as they end in the physical world, in the spiritual world they continue at the level of thoughts. That struggle over time also breeds physical conflicts. We all know that the First World War did not end all wars. That is a reason why. This is the combined message of the two cover images. I’ve always loved to operate with subliminal messages in my images, that’s a good example of that. It contrasts with the title of the album and illuminates its irony. All this is released at the time when a war above all else is taking shape. There are no coincidences in the world." - Peter Sallai[32]

The Military Museum which the band used in 2021 to present the album to the international press hosted a pre-release evening on 3rd March 2022. Ticket cost: 30€. The number of tickets was strictly limited.

Access to the events is limited to wristband holders only. Purchase the album + event entry via link is required to gain a wristband. Online pre-ordered albums and wristbands collected from hmv Vault, Birmingham and Westfield White City on the day of the event.

Photography restrictions may apply as well as reasonable social distancing between the artist and those wishing to attend the event.[35] 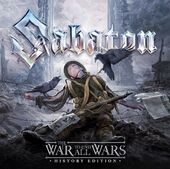 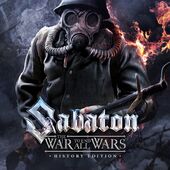 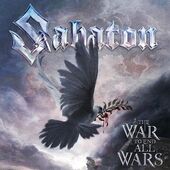