HOW WE MADE OUR REAL "DEBUT ALBUM".

This album is really the beginning of Sabaton as most of you know us today, from both a musical and lyrical point of view.

We recorded Primo Victoria back in early 2004 and since we didn't have a record label we paid for it ourselves and returned to studio Abyss and Tommy Tägtgren to record our new tracks.

As some of you might know, we had recorded the Metalizer album in 2002 and it had still not been released by our first record label and we were really hungry for revenge. During the two years we had waited for Metalizer to be released, we had basically done nothing else than rehearse, play shows, write new songs and then rehearse some more, with the result that we entered the studio as more experienced musicians and more confidence than ever before.

The recording and mixing of the album was done in about a month and even tough we never had too much time on our hands we were never too stressed to experiment and try out new ideas.

From a personal point of view I really look back on this recording with joy and happiness since this album really defined us as a band and we had lots of fun while recording it. Writing lyrics was a bigger challenge now that we had decided to make an album about war and that demanded much more research than a song about beer, metal or dragons, but on the other hand it was more rewarding and easier to connect to the songs emotionally.

I clearly remember certain moments like when I after reading Antony Beevor's massive book about Stalingrad still stood there without inspiration and just thought, "fuck this!" - and took a few pages from a Russian soldier's diary written druing the battle and locked myself into the studio on my own in the night and improvised lyrics and some of the melodies right there on the spot.

Pär and I worked out the system we still use for writing lyrics during this recording, Oskar and Rikard laid down their best guitar solos so far and the crazy afterparty with brothers Tommy and Peter Tägtgren ended up with our dear drummer Mullback having a 3-day hangover and not being able to drink wine for 5 years.

And yes, I really wrote lyrics to "Metal Machine" in the bathroom, on toilet paper, with a cardboard beer crate as a support! /Joakim

THE START OF SOMETHING BIG?

I must say that every time we play Primo Victoria live I get goosebumps. When the songs starts and during the "Six of June 1944...) part, when I see all the hands in the air and whe the crowd sings along, then I feel like I'm dreaming and don't want to wake up. Playing drums on Primo Victoria record was really fun because I love the hard and fast songs on that record. It felt like our first proper record with a serious record label and we had so much fun again together with Tommy Tägtgren. Primo Victoria felt like the first real step into something big. /Mullback

This was the easiest album to record so far. At least it was for me. I was done with my guitars way earlier than planned. And I think it was the most relaxed recording so far. We did not have a record deal yet and maybe that's why we didn't feel any pressure and could work at our own pace. And it turned out pretty good! =) /Oskar

I remember that I was really amazed by the sound. This was the first time we seriously tried harmony choirs and the song Primo Victoria was the first song we did choirs on. We all had a big smile when we heard the result. /Rikard

HOW I JOINED THE BAND.

This album was recorded before I joined the band and it was of course my first contact with the band. I had heard the name Sabaton a couple of times before in a newspaper.. But dismissed them as another crappy band. But in late January 2005 I was sent some songs with the request if I wanted to do an audition for the band. And I was totally surprised when the songs were really good. So the next day I went to the rehearsal... And the rest is history. /Myhr[2]

Pär: "When we entered the studio to start the recording, we had no idea how Sabaton was meant to sound. I remember sitting behind the mixing desk when we first listened to all the harmonies in the chorus of the title track; that was one of the best memories from a studio session ever."[3]

After writing the music for the title track, the band realised they needed lyrics that could stand up to the powerful new sound they had created, and they chose the allied invasion of Normandy during World War II. It worked so well that they went on to write the rest of the album about historic battles.[4]

Joakim: "The idea of a war concept on the album started with me and Pär writing the lyrics to "Primo Victoria" on an early pre-production stage. At that time I had already written the lyrics to "Panzer Battalion" and Pär and I figured we needed something fitting the mood of "Primo Victoria". And what could be more fitting than a tribute to the men who charged up the shores of Normandy sixty years ago? The result convinced us to write a concept album on the theme of war. With that decided, we let the mood of each song decide what war/battle would be most fitting for the tune."[5]

Joakim: "We thought it would be interesting to base the album on real battles in our own time, and at the same time keeping some sort of realism. "Wolfpack", for example, is based on an actual submarine battle, which is why we’re counting all those submarine codes in the a-capella part. As far as the influences go I really don’t know of anything specific that may have inspired us, but I read a lot of Tom Clancy myself, and I guess that might have something to do with it. Movies is of course a great source of inspiration, mostly when creating music, but I guess it carries over to lyrics aswell. What happened 9/11 has to some extent influenced the lyrical content of the album, especially in songs like "Reign Of Terror" and "Panzer Battalion".[6]

Joakim: "I always write music first without knowing which lyrics will be added at some point. When I had some things that were really impressive and quite dramatic, I happened to watch a television report with a band mate about the 60th anniversary of the invasion of Normandy, D-Day. We just looked at each other and said at the same time, "That's it! The music fits the topic perfectly. As a result, we gradually developed more and more ideas. War is an issue that will unfortunately always move people. Everyone knows what a damn tank looks like and may also have an inkling of what that monster can do. We do not glorify the war, but sing, for example, about experiences from the perspective of a ordinary Russian soldier who has to experience the horror. Images emerge from our music and the theme is inexhaustible. Even if it's terrible."[7]

Joakim: We had songs in the beginning obviously about everything. One of them that I liked was Panzer Battalion, which is about military history. Then we were doing the demo for Primo Victoria actually and we thought that it had a big epic sound. Pär and me were sitting down saying we should have a big subject and D-Day just came up. A little bit of research and then off we go. When we were writing those lyrics it was interesting and fun again so we thought this was what was missing because before that I would write the music, and I was really focused on the music, and then when it came to the lyrics we were like: “More lyrics? Okay..” As long as it wasn’t shit it was good enough. (laughs) But now all of a sudden we wanted to make it better; we wanted it to be correct and also fit with the music. I mean, heavy metal pretty much has the emotion you get in warfare. There’s hatred, depression, also euphoria, happiness.

So we decided to do Primo Victoria about D-Day, and then on the demo there was this song called Nightchild and we got some offers from record labels, but nothing we liked, so we decided to pay with our own money and record the whole album. At that point we were making some new songs and we went to the military history theme again. Pär and me were writing the lyrics because he heard a song I wrote, can’t remember which one exactly – probably Stalingrad, and we were thinking battle of Stalingrad here. Then we talked and had the idea to make the whole album about military history and war from all over the world. So we took this song Nightchild and re-wrote the lyrics, so it’s Purple Heart actually. And that was the beginning and people really liked that.[8] 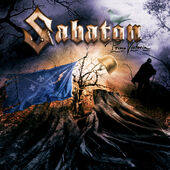 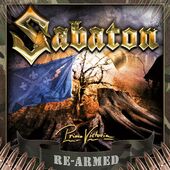