The Art of War

1. Masters of the World
Metalizer is Sabaton's third studio album. It was released on 20 April 2007.

THE FIRST TIME IN A METAL STUDIO

Our first real album and in many way the realization of a dream. The only problem was that we had to wait 5 years for it to be released!

To record an album in 2002 and have it released in 2007 was in many ways a strange experience. After Attero Dominatus this thing comes along, with songs we have barely heard for 5 years and it was really strange to pick it up from there since neither the songs, the sound, or the lyrics reflected where the band was at the time. It was fun as hell to bring the old songs on the road though, and once we got the tour rolling everything that had seemed strange was gone.

In the beginning of the recording of this album, we spent so much time doing retakes and making sure that everything was tight and correct in pitch, that we had spent one week of studio time before we really got things rolling. We were young and really wanted everything to be perfect, as if to convince the world that we were much better musicians than we really were. It even went so far as us listening to every take solo, trying to find mistakes in each others takes and that is never a good idea.

After about a week, I guess we realized that we’re not gonna fool anyone and once we got past that point, the recording became a very fun and exciting experience. It was after all the first time we were making a real album and had time to experiment a little bit and try out new things compared to when we recorded our demos earlier and had no time at all.

The best thing about the recording of this album was that we really got to know each other as a musicians and got to discover each others, but most importantly, our own strenghts and weaknesses. /Joakim

WHY I HATED RED WINE FOR FIVE YEARS

During the Metalizer recording I was so happy and satisfied because it was one of my biggest dreams to record a proper metal album. One of the things I still remember is that I was very nervous every song I recorded, and I wanted to celebrate when the album was done. Tommy Tägtgren said to us that he was a real champ of doing homemade wine. A couple of hours later we had bought the stuff for making the wine. When the album was done we had a really fun but quick ending party, because the wine was so strong but also very good tasting. I drank so much the first hour and I felt like the happiest man on earth. One or two (?) hours later I was on the toilet puking all night long and the day after and the day after that. Last year was the first time I could drink red wine again and now I love it! But I have some distance to homemade alcohol nowadays.

As Mullback mentioned, we had a party celebrating our first record with Tommy and his famous Cheateu de Abyss and it was not only he who drank a bit too much. I remember one tall brownhaired guitarist named Oskar ended sitting up in a chair with his forehad on the floor for hours looking like an ostrich. My night endend up in the toilet as well. /Rikard[2]

Pär: “We knew the album wasn’t going to change the world or anything because we certainly weren’t the songwriters that we would become later, but it was our first album and we were young, so we were super excited.”

“We received all these explanations about why the album was being delayed and delayed and delayed, and in the end, the label told us, ‘Heavy metal is dead, and we have to wait until it becomes popular again.’ I couldn’t believe it - like, what, were they going to wait for 20 years to release the album? But that was that.”[3]

Joakim: "Metalizer" was actually our debut and was already recorded in 2002, but didn't appear until 2007. So since 2004, when we recorded "Primo Victoria", we have only made albums about wars. “Metalizer” was supposed to be released in 2002/2003, but these incompetent Underground Symphony assholes in Italy never managed to release it. We were fed up at some point and then brought it out through our old Black Lodge label."[4]

Written before Sabaton adopted the theme of war, the lyrics for this album deal with more typical “metal” themes ranging from Lord of the Rings (Shadows) to the band’s love of metal and its fans (Metalizer, Masters of the World). 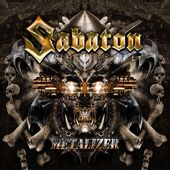 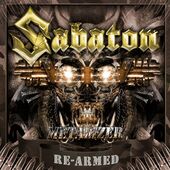