Ghost Division is the second song on The Art of War album by Sabaton.

Joakim: "At the start of The Art of War album, we’ve got a fucking aggressive moshing song, "Ghost Division", about Rommel’s push into France. And it’s not really the best move to start an album that way, not from a German point of view, or a French point of view either. [Laughs] But musically, that song feels like fucking Blitzkrieg tanks running you over. That was the perfect subject to fit the song, and it was almost kind of a safe bet, because Rommel was never accused of any war crimes. He wasn’t part of the Final Solution or the Holocaust. He was a general doing his job, a very good soldier and commander. And when the Nazis forced him to commit suicide, even Winston Churchill said that the British had now lost their last gentlemanly opponent."[4]

Pär: "In "Ghost Division" we wrote about the armored division under the command of Erwin Rommel. The guy was not an avid Nazi, he just followed orders, and at the same time he was a great commander who could show a lot of respect to the opponent and his soldiers. I think he managed to remain human after all. Even if he fought on the "wrong side."[5]

Joakim: "(...) There are thirteen chapters in the book and thirteen tracks on the album, and each song corresponds with a chapter. The first chapter is an introduction, but the second chapter states outright that in war, sometimes you can be too hasty and make stupid decisions by rushing, but no war has ever been won by taking it easy or going on the defensive. So in a sense, it’s talking about Blitzkrieg."[6]

As the German Wehrmacht invaded France in 1940, Erwin Rommel and his 7th Panzer division set a new record for the longest thrust in one day, covering 200 miles. Not even the German high command could keep track of where they were located at all times during the French campaign, due to their speed and their ability to appear where they were least expected. They were given the name: Ghost Division.[7]

The 7th Panzer Division, commanded by Erwin Rommel, participated in the invasion of Belgium and France in 1940. By the third day of the invasion, the 7th along with three divisions commanded by General Heinz Guderian reached the river Meuse. By the 16th of May, the 7th had reached its assigned objective at Avesnes where it was supposed to stop and await further orders, but Rommel decided to press on. On the 20th of May, the division reached Arras where they encountered heavy resistance from the British forces. They reached Lille on the 27th of May which they sieged until the 31st. On the 17th of June 1940, the division was ordered to advance on Cherbourg. The division advanced 240 kilometers in 24 hours, and after two days of battle, won against the French garrison. The speed and surprise they were able to achieved was considerable, to the point that the German high command lost track of the Division and thus they earned the nickname “Ghost Division”. (Text credits: Gregory Sandoz)[8]

On whenever they plan to replace the song with another:

Pär: "I don’t think so. Often during the first song the sound is bad and we don’t hear each other. Luckily this gets better after the first song, after some fine-tuning. Ghost Division is just an easy song for all of us to play, we don’t need to hear each other to play it. Especially on a festival where we can do only a short soundcheck. That’s why we always start with that, it’s a safe and easy song, also very energetic for the crowd. We just don’t see us starting with another song than that one."[9]

Is "Ghost Division" is still fun song to play live:

Joakim: (...) it’s a song we’ve played many many times, I don’t really have to think about what the next vocal line is.  It just appears naturally.  But then if you do something really, really much, it becomes second nature, and then it’s kind of fun again because I don’t have to think at all about anything else besides doing something fun with the crowd or kicking a band member in the ass or something like that.  So ‘Ghost Division’ is really fun to play because that’s…. I can actually enjoy seeing the crowd.  “Oh, there’s that guy I remember him! He’s been to many shows.  And oh fuck! Uhh, what’s her name again?”  You know it could be, “Wow! There’s a good atmosphere tonight.” or “Wow!  It’s good here but people on the right are a little bit slow, I got to get them going” you know.  I don’t have to think about anything about the song or the lyrics.  That is programmed in my spine, so it’s kind of liberating.  So I can actually experience the song or the music or the atmosphere without thinking about what I’m doing.[10] 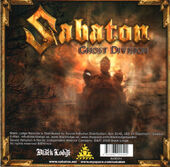 Ghost Division artwork on the back of Cliffs of Gallipoli single